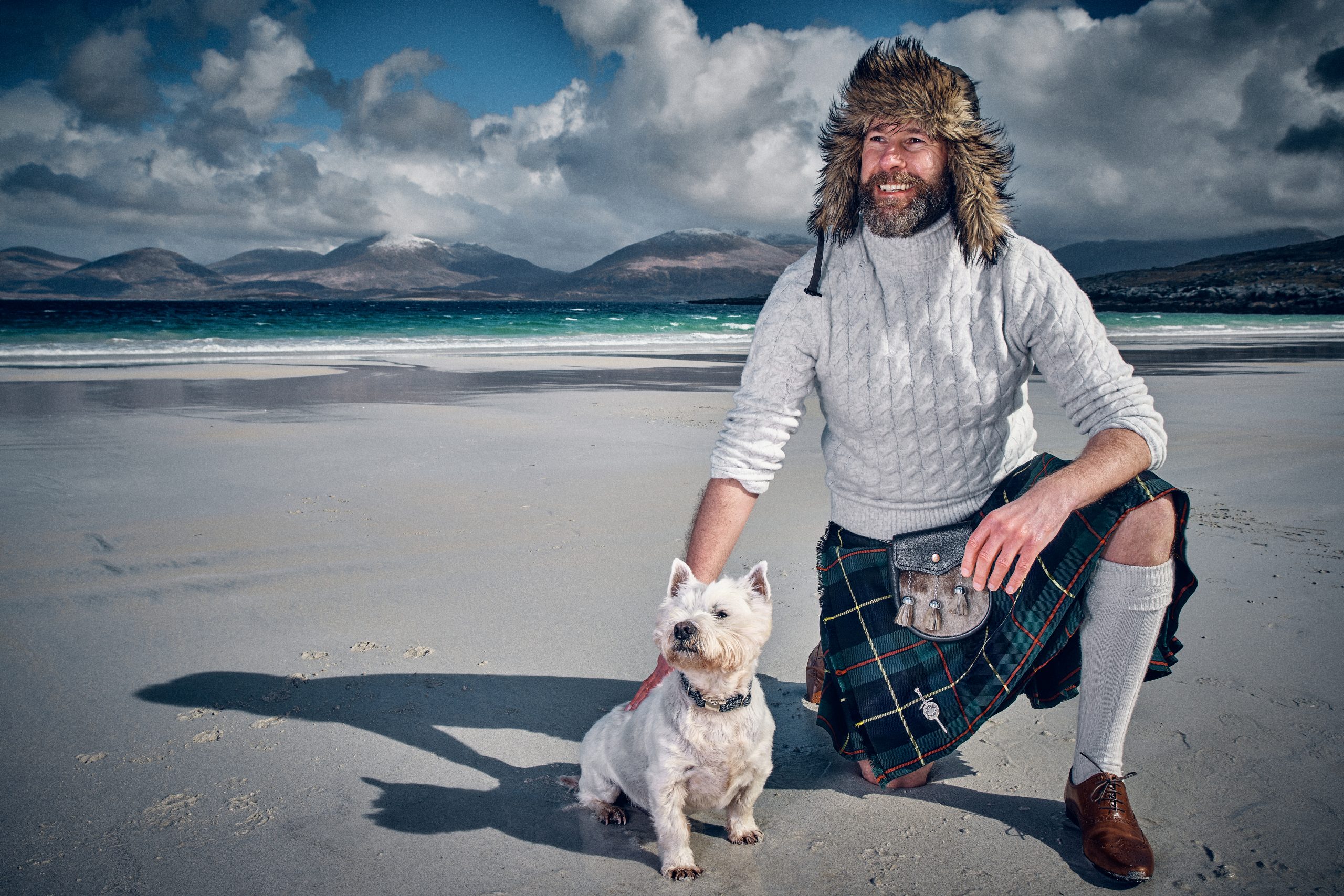 “It’s a great thing to enjoy what you do.” – Coinneach MacLeod

Born in the 1970s, Coinneach MacLeod grew up on the Isle of Lewis. Just like many other young boys of the era, he was football daft and has fond memories of playing football for hours out on the road in his home village of Cromore. Now working for UEFA on a development project, football has remained an important part of his life, but his cultural heritage and passion for island traditions have also allowed him to develop an altogether different persona as The Hebridean Baker. He says,

“There have been so many ‘pinch me’ moments throughout my career. As a 10-year-old, I was out playing football on the road in the village, imagining myself playing for Scotland and travelling to World Cup qualifiers. If I could go back and tell my 10-year-old self what I’d be doing now, I think I’d be pretty chuffed.”

In his “day job” with UEFA, Coinneach is working in developing countries, looking at ways to help professionalise the sport. It’s a role that he finds very rewarding, saying,

“I was recently in Zambia doing a project with the Premier League clubs there. At the end of the four-day workshop, you could sense the buzz and excitement of those taking part as they looked forward to getting back to their club and implementing everything they’d learned. You come away with such a sense of achievement. If that’s what I can continue in my career, I think I’m very fortunate.”

Not everyone gets to work in a job they love or earn a living out of their passion, and this is something Coinneach is keenly aware of. He says,

“I knew at the age of 12 that I wanted to get into football, and I tried a few different paths. I became a qualified referee, and I moved to Russia to be a sports journalist, but eventually I found my niche and I’m very glad I did. I still get an unbelievable buzz from the sport, although I think I peaked at U-12 as a player! I remember scoring a beauty in the MacLeod Cup semi-finals, and I was dropped for the finals. That was it, that’s as far as I got. A lot of people say when you work in an industry, you lose your love of it – would you still love chocolate if you worked at Cadbury’s? – but I still love it, sitting down on a Saturday to catch up on the results just the same as I did as a 12-year-old – although in those days I was coming in to see the results on teletext.”

If Money Was No Object…

A quote that resonates with Coinneach comes from philosopher Alan Watts: “If money was no object, what would you do with your life?” He recognises that he hasn’t reached a point in life where he has no need for money, but he knows that he has always strived to do things he’s been passionate about. It was during the lockdowns of the Covid pandemic that he found himself spending more time enjoying another lifelong passion – baking.

“It all began because of a conversation with my aunt. She’s 93 and still bakes every day, and she was talking about some recipes and her worries that folk would stop making them. These are traditional island recipes, so I thought I’d just post some videos of these recipes online, not knowing if anybody would watch them.”

As it was, these videos turned Coinneach into a TikTok sensation. He says,

“Even when I’ve lived away from the island, I’ve always been a very passionate Hebridean; I’m so proud of where I’m from. I just wanted to find a way to talk about the island’s uniqueness, our identity, our culture, and the Gaelic language – and I’ve always loved baking. I thought to myself that if I was going to be making videos about baking, I could tell other stories about the island and I could speak a bit of Gaelic, and these videos would be a good conduit for that. When I started, I had no expectation of having anything more than 100 followers, but in just over a year I’ve had 16.5 million viewers. The positivity has been amazing, and it has turned into a global phenomenon.”

In today’s world, creating a brand, an image, and a storyline is a crucial element of standing out from the crowd and getting customers to buy into your product. In terms of becoming The Hebridean Baker, Coinneach admits that although he’d like to say he had a big strategy in place from day one, the content for his videos in fact came together pretty naturally. He says,

“The main content is the baking, then the stories about the island, wee Gaelic lessons, talking about whisky or foraging, and anything that is identifiably Hebridean or Scottish. From that start point, I was plodding along quite happily making the videos, not thinking anything else of it, until Elle magazine published an article saying the only thing they’d miss about TikTok is The Hebridean Baker. The article was in response to Donald Trump’s aim of shutting down the platform during his term as president, but unbeknownst to me at the time, it meant the US market was suddenly getting to know me. I remember I’d made a hot toddy cake – or something equally simple – and the next day I woke up to find I had tens of thousands of new followers. I was scratching my head thinking the cake must have been better than I thought, but then I discovered it was because of the magazine article. I feel I’ve unintentionally created a brand people have bought into, and enjoy. It’s silly things like wearing the Fair Isle jumpers and my furry hat, the kilt, the wee dog, speaking Gaelic, and being proud of the island. It has just resonated with people, and 70 per cent of my followers are in North America, so I think they see something of the old country, something they want to hark back to.”

It may have been unintentional, but Coinneach’s advice to anyone intentionally setting out on an entrepreneurial venture is to be passionate about what you do. People have bought into the Hebridean Baker persona, but it’s an authentic persona. He says,

“It’s great because I’ve done nothing other than the things I love. I haven’t had to change anything that I’d normally do, I’m just sharing stories and recipes that I would love myself. People can sense authenticity, but they can also sense when it’s not authentic. You can play a character, or do something that’s not yourself for a wee while, but you can’t do it for very long because people can tell straight away that it’s not authentic.”

Thomas Edison once said that most people miss opportunities because they come dressed in overalls and look like hard work. Living on a remote island, you might imagine that opportunities are hard to come by, but Coinneach doesn’t believe that being remote from big cities is a big disadvantage anymore. He says,

“There are times that I’ve had to travel, and I’ll be off doing a two-week book tour of America with my new book, ‘The Hebridean Baker.’ You can’t do everything from home, but when it comes to the digital side of things such as content creation, I think there are huge advantages to being in such a beautiful landscape. It’s idyllic – apart from the gale force winds and hailstones! But, when it comes to making a brand and working from a small place (with a big opportunity), it’s hard work. You really have to work like a beast to make it work. Someone told me there are 11,000 cookbooks released a month across the world, so what makes yours stand out, or what makes your product stand out against the rest? You need to have the right concept and the right idea, and then just as Alan Watts states in his philosophy, if you’re passionate about something, you’ll find your tribe; other people who are as passionate about what you are and what you do as you are.”

Coinneach has always strived to do things he’s passionate about, and he feels very lucky to be experiencing everything that’s coming his way. When opportunity knocked, he was ready, but he’s keen to point out that finding happiness in life is very different to finding fulfilment. He says,

“If you’re striving to be happy every day, unfortunately, you’re going to fail every so often. That’s how life is and should be. If you strive to be fulfilled; if you strive to have a life full of things you enjoy, that’s a much better goal than always trying to be happy. Fulfilment will give you great memories and keep you happy, but it’ll also bring you challenges. Island life is tough, and while a lot of people moving here for the first time come for a quieter life, or a slower life, I don’t know anyone from Lewis who doesn’t work four jobs, run a croft, tend to sheep, and do all sorts of other things. You have to be a very busy person to want to live on the islands, but there’s enjoyment in meeting challenges when you’re doing what you love.”