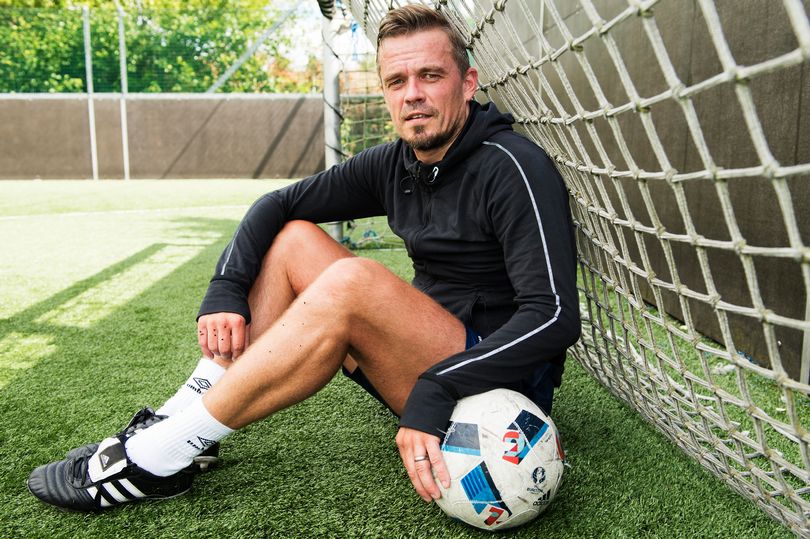 “You have to work at your game; you have to practice; you have to love it, but opportunities come at different times. There’s no one path.” – Simon Donnelly

Like many young boys his age, Simon Donnelly grew up obsessed with football. If he wasn’t playing football in the park with his mates, he was playing against the wall in his back garden, and even inside the house when the weather was bad. He was always playing football, and he always knew he wanted to be a professional player, he just had no idea how he was going to get there.

There’s No One Path

Simon’s dad was a big early influence in his passion for football, regularly taking him to watch games, and his footballing hero was Kenny Dalgleish. He dipped in and out of boys’ club football, and it wasn’t until he was 16 that things started to get serious. At 16, he signed with Queen’s Park, and then six months later moved to Celtic. He says,

“Just goes to show that six months before I signed for Celtic, I was still playing with my mates in the park. Kids today get hung up on pro youth. They have to be in pro youth, and if they haven’t made it by age 13 or 14 it’s failure – it totally is not. You have to work at your game; you have to practice; you have to love it, but opportunities come at different times. There’s no one path.”

Being Ready for Opportunities

Looking back, Simon realises that all the football he played in the park and in the back garden was preparation for the day that opportunity came his way. He was putting the work in; he was honing his skills, but it didn’t feel like work or training, it was simply enjoying football. Playing indoors with a smaller ball seemed like a bit of fun, but it was all adding to his skills and developing the quality of his skills as a player.

As with most things in life it could be argued that “Lady Luck” helped Simon get his career underway: a friend’s brother played at Queen’s Park and invited him along. However, had he not been ready to take the opportunity when it came, and had he not been demonstrating the level of skill he’d achieved when it came, the invite to play at Queen’s Park would have taken him no further. He says,

After signing for Queen’s Park, Simon “played for every team there other than the first team,” which some ambitious young players might have viewed as a negative thing. For Simon, playing for the first team was the goal, but he made the most of every game played, simply loving the opportunity to get on the pitch and keep developing as a player. With hindsight, he now recognises the benefits of playing against different levels and different age groups, and the experience he gained.

His performance at Queen’s Park got him a trial for Celtic. In that trial match, he scored a hat trick, so things couldn’t have gone better. He was invited to play in a tournament in Geneva, and things didn’t go so well, leaving him thinking that he’d blown the opportunity he’d been given. However, he’d been seen in the trial match, and his performance in that game turned out to be the opportunity that got him signed for Celtic. He says,

“I didn’t play well in Geneva. I came back thinking I’d blown my opportunity. But, I’d been seen in the trial game, and that was the opportunity that got me signed, not the tournament. This highlights that every opportunity to play is an opportunity to progress, not just what you perceive to be the big games.”

Simon saw himself as a striker, but after a strong start in his career, injury problems and missed matches found him struggling to find form. He says,

“I always had determination, but at that time, after a golden patch, I needed an arm around the shoulder; somebody to identify why I wasn’t performing so well. I wasn’t the new kid anymore, the opposition were onto me, and there’s a pressure that comes with that.”

That arm around the shoulder belonged to Tommy Burns. As coach, he suggested that Simon should change position. He took him away from the physicality of the front line and positioned him in a deeper role, saying it would suit his style of play and allow him to link up better. This sort of change is not something that every young player is happy to accept, but Simon chose to go with it. He says,

“The change did suit my style of play and I learned much more about the game there. It was the best thing for me; it added strings to my bow and it gave me more confidence, letting me get back to enjoying it. The change of position allowed me to progress further as a player.”

The decision made by Tommy Burns to change Simon’s position is an example of good management. As a coach, as well as player, you need to be open to trying new things. As Simon points out,

“Players sometimes get stuck thinking of themselves in one position, and as a coach, you can only play the players you have. This means there’s a need to identify the individual skills of each player and the best position for each player’s style. Being open to trying new things – as player or coach – is the only way to create an effective team.”

The key takeaway from Simon’s career is that there is no one way to success – there’s no one path. Setting yourself a goal is only the beginning, you then need to stay open to trying new things and using every opportunity that comes your way as an opportunity to progress. Perhaps the most important thing we would all do well to remember is that those who make it to the top in their game do what they love and love what they do.

Don MacNaughton is a High Performance Coach working in sport and business over the last 18 years.

To find out about the latest one to one coaching programmes email donald@zonedinperformance.com