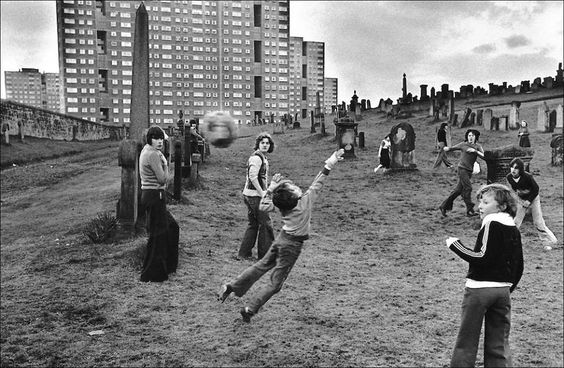 “There’s always the lure of watching rather than doing.” – George Galloway

George Galloway is known to many as a politician and broadcaster, but he’s also a lifelong fan of football. He remembers growing up in a housing estate in Scotland in a time when every street was full of kids playing football, even when it was getting dark outside. He says,

“You stayed out until your mum dragged you in. There were no parks, kids stayed out in the dark, playing on the cold, hard streets, and it’s not something I see so much now.”

More Important Than That?

George believes that football was once of profound importance to the social fabric of Scotland, and the fact that street football is now rarely seen indicates a dip in the central importance of football to Scottish life. He says,

“When Bill Shankly said football wasn’t a matter of life or death, it was much more important than that, those words could only have come from a Scotsman of his vintage, and from his background. Whether or not it’s still as important I think remains to be seen, but the indications are that football isn’t as important as it once was.”

A Change in Society

Back in 1974, George followed Scotland to Frankfurt in the World Cup. He says,

“I gave up my job in one factory to follow the team, knowing that when I came back, I’d get a job in another factory. Now there are precious few factories left to leave or re-join. In 1974, we had coal mines; we had steelworks; we had shipbuilding, we had a motor car, truck, and motorbike manufacturers; we had an aluminum smelter, all the things that made for an industrial working class. Workers played football, and then their sons played football (not so many daughters back then), so that’s a pretty dramatic change in society. The change in class composition and the way the working class now lives is very different.”

Bill Shankly was part of Scotland’s industrial working class, and other greats of the era – Matt Busby, Jock Stein, and Alex Ferguson – all experienced an industrial upbringing and shared an industrial heritage. George says,

The Lure of Other Things

The change in society is perhaps part of the reason behind Scotland’s change in footballing fortunes since the high point of the 1974 World Cup. George says his father always argued that it was because “people got soft” that football went downhill. George disagrees, mainly because there are other countries richer than Scotland producing top players, but he does believe that the level of dedication needed to make it to the top is not commonplace in young players today. He says,

“I’m not saying you need the experience of being brought down on a cold, hard road, or on a cinder pitch, it would be fine if everyone was out playing on Astroturf instead, but there’s always the lure of doing other things: the lure of the iPad, the phone, and the lure of watching rather than doing. Even my own sons who are interested in being footballers will sometimes want to play football on the computer screen instead of getting out in the back garden that’s just there waiting for them.”

A Reflection of Society

The recent Super League debacle has been a great example of football being a reflection of society. As the story hit the media, it gave many a reason to reflect on the origins of the game. Images of working men coming out of factories and using their leisure time to play football got people thinking about where it all began. George says,

“In the 48 hours of the Super League’s existence, I heard the words ‘working-class’ in the media more often than ever before. Questions were raised over what would happen to the working-class fans, and how could the working class still identify with football if players are earning £1 million a week. It got a lot of people talking about the unacceptable face of capitalism. Greed is entirely destructive to the game of football. Football needs to be about risk and reward, promotion, and relegation. The rock ’n’ roll uncertainty is what people love about football. Not exhibition matches.”

The days of playing 20-a-side in the street and competing against big brothers and bigger lads in an effort to progress up the pecking order may be gone, but something that has never changed is the need to play football if you want to improve as a player. Practice makes perfect, but it takes perfect practice to succeed. When asked to name the best player he’d seen in action, George named Charlie Cook. He says,

“I’ve seen the likes of George Best, but he was only a great player when he could get out of bed. For me, Charlie Cook was the best consistent player.”

High performance is being able to replicate it. Moments of brilliance can make you a momentary media star, but making it to the top of your game takes consistent, dedicated practice, and this is where the lure of other things can get in the way. In the days of Scotland’s industrial past, if you weren’t at work, you were playing football, but in today’s society, the ways of spending your leisure time are endless.

As a well-practiced and accomplished speaker, George puts it this way:

“The more you practice speaking, the better you should get at it. It’s the same with football practice; if you do it enough times, you should get better.”

What’s interesting to note is that one of George’s most famous speeches, given at the US Senate in 2005, was not a prepared speech. He says,

“I  hadn’t prepared a speech. I just knew the truth; new the case, and it was a chance to get up close and personal. If you’re telling the truth, you don’t need to memorise. The truth is the truth. You could say I Cruyff-ed him, or as George Bush said at the time, he ‘misunderestimated’ me.”

What’s interesting about this is that knowing who you are and what you value is at the heart of realising your true potential as a player, a coach, or in any other aspect of life outside of football.

The bottom line is that becoming the best you can be takes doing your best and being your best, taking us full circle back to the need for dedication. What matters most?

To hear my full podcast with George Galloway click here