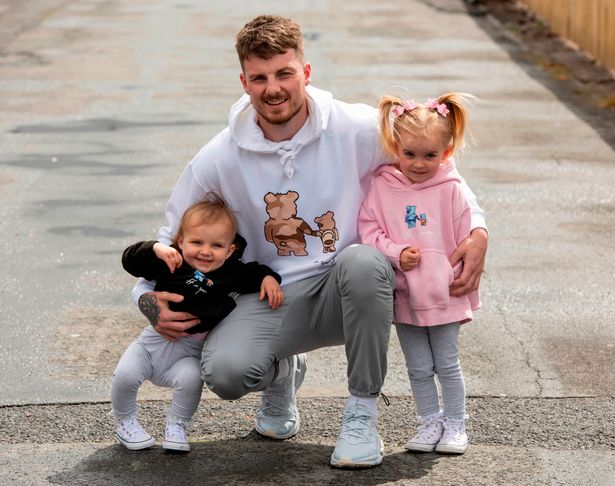 “Creativity, having ideas, needs to be without pressure – if you need an idea to work, you can’t just try something and see what happens.” – Mike Sandilands

Mike Sandilands is the founder of OffxSpringz Clothing, a brand that came to life during Covid lockdown. Having always wanted to develop a clothing brand, time spent at home with his two young daughters drawing pictures on their doodle pads provided both inspiration and an opportunity to turn a dream into a reality.

For Mike, the idea of creating a clothing brand had been in the background for quite some time, and as he says, “I’d had plenty of ideas, they just weren’t always very good ones!” Lockdown gave his creativity a nudge when he decided to buy himself a heat press and learn how to print his daughters’ doodles onto T-shirts for them. It was a learning curve that involved trial and error, but Mike was already thinking ahead. He says, “I get quite obsessive about projects. If I get something in my head, I’ll keep going with it, so I looked into the equipment I’d need to do a good job and that way I’d know if things weren’t working it was down to me!”

The ‘wee bears’ logo now associated with the OffxSpringz brand came to him in the night and it instinctively felt right as it reflected the family clothing ethos and his own two daughters. Mike’s dad is a tattoo artist (as well as a postie) so he helped him get the idea in his head onto paper. The next step was to take the design to a graphic designer so that it could be digitalised, and then printed onto T-shirts for the family.

It wasn’t long before family friends were asking to have ‘wee bears’ T-shirts and hoodies made for them, and then their friends wanted one… The brand logo was proving popular, and as Mike says, “You begin to think you’re onto something when people on Facebook and people you don’t know are asking if they can have an item of clothing.”

As a football fan, Mike knew that he wanted to tap into the sport to promote the brand. He says, “When fans see a footballer wearing something, they want to wear it,” so marrying his love of football with his passion for clothing was a smart step to take. Asking people to wear the brand is something he has never shied away from, saying, “What’s the worst that can happen? Asking someone and having them say no isn’t the worst thing, getting no reply at all is worse, but you’ll never know unless you ask.” This approach to marketing has paid dividends as the OffxSpringz logo has become more and more visible.

In the early days, Mike asked bigger brands for advice, but there’s no guarantee of receiving any replies. He’s since realised that everyone has had to start from somewhere, even the big brands, and ultimately it’s something you need to learn for yourself. What works for your business idea might not work for someone else, and what worked for another business might not work for you. As he says, “Not every shoe fits the same foot.”

OffxSpringz is a passion project that Mike is running alongside his full-time job working as a whisky distiller. After working a 12-hour shift from 6am to 6pm at the distillery, he’ll get to work on his “hobby business” at home after putting his daughters to bed, usually working until midnight. He uses the word “hobby” because he feels it’s important to enjoy what you’re doing. He says, “Sometimes people go all in trying to get a business running but it’s because they don’t like doing what they’re currently doing. I decided not to gamble. It’s a bit of a juggling act but I love my full-time job and it means I can grow the clothing brand without financial pressures. When you’re working on the basis of needing to sell a certain number of hoodies to be able to pay the mortgage, it becomes stressful and not enjoyable.”

Delegating to better people for different jobs has also allowed the brand to flourish. Mike says, “I’ve learned through trying to do everything myself that there are times when you need to hand over to someone who is better than you. I was trying to have the ideas, run the business, do the printing… but you’ve got to speculate to accumulate. You’ve got to involve other people, give them goals, and trust them with your business so that your business will grow. Rather than see the business fail because I was trying to juggle too many balls, I got my best friend in and he’s now full time.”

Not having the stress of needing to hit financial goals has also allowed Mike to grow creatively. What started with T-shirts and hoodies is now expanding into a bigger range of clothing, and the enjoyment of thinking up new design ideas remains. He says, “It can be a hobby, but as the hobby gets bigger and bigger it needs to stay enjoyable. If it has to work to feed the kids and pay the bills, it’s no longer enjoyable. Creativity, having ideas, needs to be without pressure – if you need an idea to work, you can’t just try something and see what happens.”

Successful people do what they love and love what they do. Entrepreneurial drive keeps Mike looking ahead and wondering what can be achieved next, but he accepts that he sometimes forgets to reflect on his success, saying, “I’m never satisfied. I’m always looking at ways to progress and get to the next thing, so I think I maybe need to remember to take a step back at times to realise it’s going really well and doing really well in only its first year. In my head I tend to think in terms of what I haven’t done yet, so I need to make room for what I have done too.” In answer to the question of, “What will it take to make you feel like you’ve done it?” Mike’s answer is, “I’d love to see David Beckham wearing the brand. On that day, I’m done!”

Do listen to the the full Podcast with Mike click here (https://kite.link/offxsprinz )